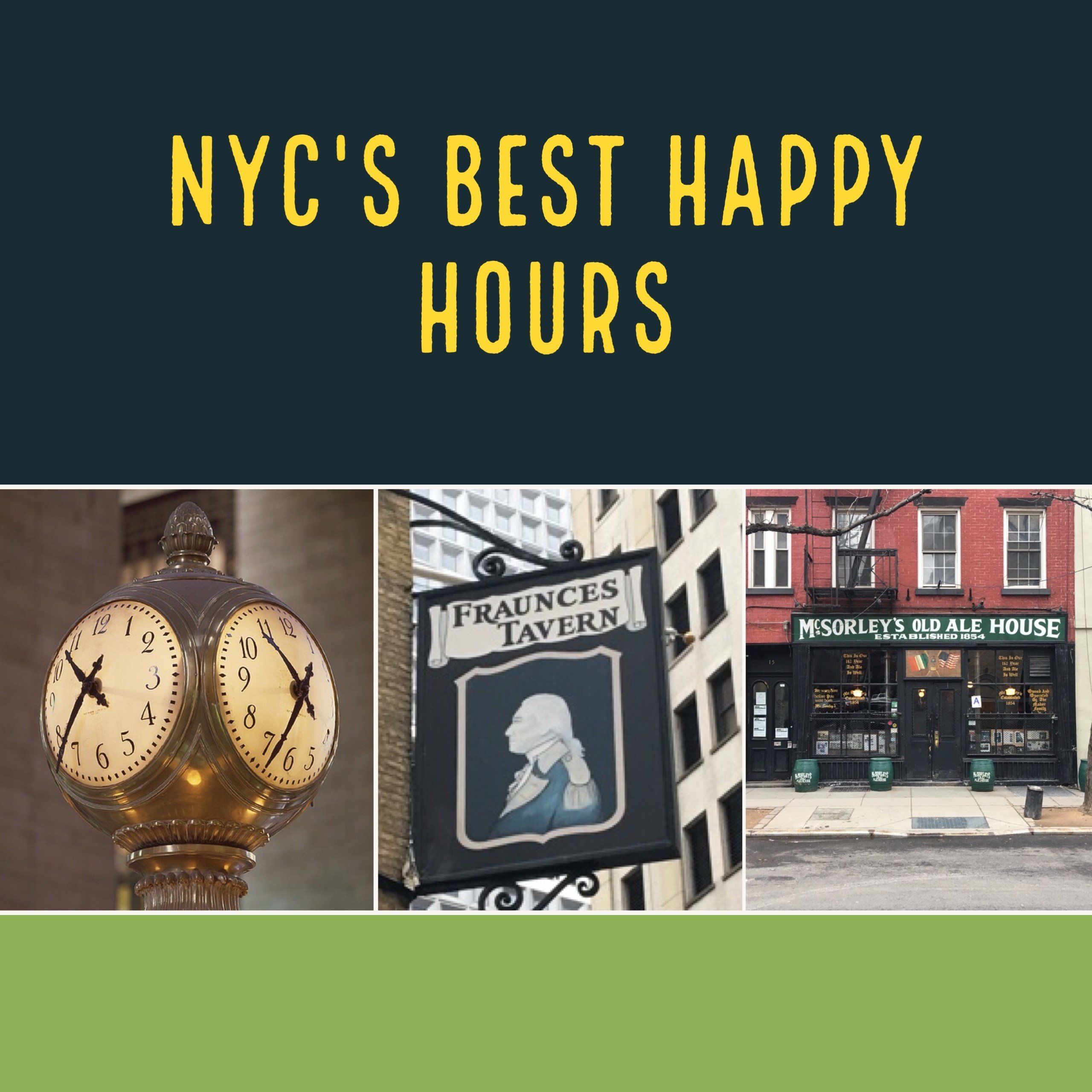 You don’t need Great Gatsby money to enjoy a night out in NYC. Whether you’re in the mood for a pint of beer, a glass of wine, or a Manhattan, the best happy hours in the Big Apple provide big city fun for small town prices.

The next time you’re in the City that Never Sleeps, enjoy a drink at these three bars.

The Oyster Bar has been around for almost as long as the Yankees have been wearing pinstripes, and in all those years, it hasn’t lost its charm.

The atmosphere is unbeatable. Deep in the cavernous underbelly of Grand Central Terminal, the Oyster Bar sits below arched tiled ceilings and soft yellow lights. To borrow a lyric from Dean Martin, the place shines like you’ve had too much wine.

Closed on Sundays, the Oyster Bar hosts happy hours from Monday through Wednesday between 4:30pm and 7pm and on Saturdays between 1pm and 5pm. Blue Point oysters go for $1.25, while a bowl of New England or Manhattan clam chowder costs $3.25. Wash it down with a beer, wine, or martini for around $7.00.

Speaking of history, Fraunces Tavern in Lower Manhattan has been around since 1762 and was the setting for George Washington’s farewell address to his troops.

Rebuilt in 1904 in the architectural style of the American Revolution, Fraunces Tavern is the oldest bar-restaurant in NYC.

Bathed in the glow of candlelight, the tavern’s oak-paneled rooms were the meeting place for the Sons of Liberty plotting to overthrow the British. Additionally, Fraunces Tavern was where Alexander Hamilton set up his first Office of the Treasury.

Decorated with Old World furnishings, the restaurant serves a selection of tasty dishes inspired by the Colonial Era like the chicken pot pie.

The selection of beers is equally as impressive. Featuring beers from Ireland’s Porterhouse Brewing Company, the bar serves an array of porters, ales and stout brews. My favorite is the Porterhouse Red, a traditional red ale.

Fraunces Tavern hosts happy hours on weekdays from 5pm to 7pm and features live traditional Irish music at the bar.

You can’t leave Fraunces Tavern without feeling patriotic. Nurture that feeling and take a stroll down to nearby Battery Park where you can watch the sunset over the Statue of Liberty.

Although St. Patrick’s Day has come and gone, some Irish pubs are year-round classics.

This is the case with McSorely’s Ale House. Tucked away on a quiet street in the East Village, the pub was established in 1854, six years before Lincoln was president.

From the sawdust covered floor to the cordial but matter-of-fact bartender, the only thing that’s changed at McSorely’s is the clientele. The tavern’s slogan keeps it simple: “We’ve been here before you were born.”

Simplicity is what McSorley’s is all about. First, all drinks cost $5.50. Second, there are only two types of drinks, dark ale and light ale. McSorley’s has no happy hour. But then again, at these prices, you might say that happy hour is all day long.

The crowd is full of regulars who wander in and out throughout the day. They stay for a drink and catch up with old friends. Then they wander back out, only to return again later that day.

No matter which happy hour you choose, with so much nostalgia in the air, you’ll feel like you’re among old friends. Cheers!

Why Virtual Mailboxes are the Future
Tips from a World Traveler